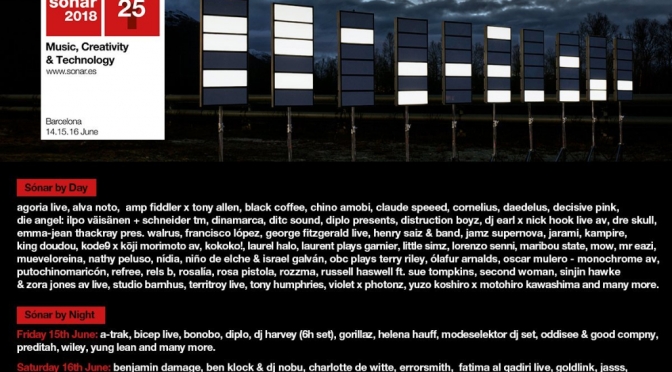 At long last Sónar is back, this time celebrating its 25th year, with more than 140 performances scheduled. And as has become tradition, it kicks off the first day with Sónar by Day at the Fira de Montjuïc with a line-up that includes the return of one of the most-anticipated acts in the history of the festival, which has left audiences wanting more every year since it started up in 2014. It’s DESPACIO, the club experience from James Murphy (LCD Soundsystem) and brothers David and Stephen Dewaele (2manydjs) at the decks. Along with a spectacular sound system, they’ll play only vinyls in three six-hour DJ sets, one on each day of Sónar by Day. The first day of the festival, highlights also include the session ‘Laurent plays Garnier’, where renowned French DJ Laurent Garnier closes out the day with a session that sees him reviewing his whole career behind the turntables; Francisco Contreras (Niño de Elche) and flamenco dancer Israel Galván, with a show they’ve created for the first time together and which makes its debut at Sónar; Norwegian artist Jenny Hval and her extravagant, provocative and avant-garde spirit; the precise melodies of British artist George FitzGerald, who presents his second album, ‘All That Must Be’ (2018); Little Simz, a project from young vocalist, actress and rapper Simbiatu Ajikawo from London by way of Nigerian parents; emerging Korean DJ, singer and producer Yaeji; Kode9 presents a show inspired by video games, with visuals by legendary anime artist Koji Morimoto; composers Yuzo Koshiro & Motohiro Kawashima put on a show inspired by classic games such as Streets of Rage; iconic DJ and leader of the New Jersey garage sound Tony Humphrieshas a set house lined up that’s inspired by the golden age of radio in New York; urban beats from Valencia’s Mueveloreina; and Putochinomaricón, an electro pop project from Chenta Tsai, who’s from Madrid with Chinese roots.